The Real World of Technology 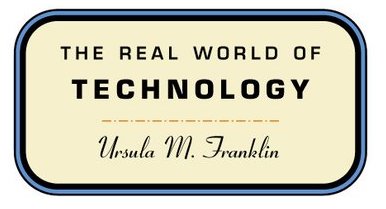 The Real World of Technology

These are recordings of Ursula Franklin's public lectures that she made as part of the 1989 Massey Lectures series. The recordings were broadcast by the Canadian Broadcasting Corporation in November, 1989. The lectures were published in a book The Real World of Technology in 1990. A second edition with four additional chapters was published in 1999. If you want you can drop this URL in your Podcast player to listen to them there:
https://archive.org/download/the-real-world-of-technology/podcast.xml
Franklin was a professor in the University of Toronto's Department of Metallurgy and Materials Science, where she was the first woman to honored with the title of University Professor in 1984. In 1990 she was awarded the Order of Ontario. The lectures provide a singular view into Franklin's ideas about how science and society interact with respective to power and democracy:

As I see it, technology has built the house in which we all live. The house is continually being extended and remodelled. More and more of human life takes place within its walls, so that today there is hardly any human activity that does not occur within this house. All are affected by the design of the house, by the division of its space, by the location of its doors and walls. Compared to people in earlier times, we rarely have a chance to live outside this house. And the house is still changing; it is still being built as well as being demolished. In these lectures, I would like to take you through the house, starting with the foundation and then examining with you the walls that have been put up or taken down, the storeys and turrets that have been added, the flow of people through the house — who can come in, who can go into particular spaces. (p. 10)

The recordings were obtained from the CBC's web page about Franklin's lectures. As you can see from this snapshot of the page in 2016 only five recordings were made available. However the preface to the first edition of The Real World of Technology clearly states that there were six. The Wikipedia page for the Massey Lectures says that it is a "five-part series", and looking at the information of other Massey lectures seems to confirm that it was in fact a 5 part series. Perhaps the book edition was adjusted to indicate there were 6 talks in order to reshape the text of the chapters? Or maybe it was a typo. The other possibility is that there was an audio file that was left off the website, but the sequencing of the closing credits for each part seems to indicate that there are no audio files missing. The audio was embedded as Flash on the CBC website and converted to MP3 in July, 2016.

Reviewer: yaxu - - July 14, 2021
Subject: Missing lecture
There does seem to be a missing chapter - at the end of the penultimate lecture here she says the final sixth lecture summarises the preceding five. Compared with the book, I think the second lecture is missing.

Reviewer: Ten Cold Hot Dogs - favoritefavoritefavoritefavoritefavorite - February 7, 2021
Subject: Excellent reframing of the concept of technology
Listened to as part of the Halt and Catch Fire Syllabus [Class 1 - People and Power // The Real World of Technology] https://bits.ashleyblewer.com/halt-and-catch-fire-syllabus/classes/01.html